Léopold Lambert – Paris on September 4, 2015
If you enjoy articles of the blog, have a look at The Funambulist Magazine!

nb. Although the term of banlieue can define all suburbs in France, I use this word here to specifically talk about the suburban neighborhoods inhabited by a population in economic precariousness and composed, for an important part, of French citizens of North and West African ancestry, as well as more recent immigrants.

In 2010, Funambulist-contributor Hacène Belmessous wrote Opération Banlieues (La Découverte, 2010) that examined, in the most intense years of the Sarkozy administration, the potential scenarios that would lead the French army to intervene within the banlieues of the country. Although the antagonism between the French government and the banlieue residents has always been strong, the seven years of Sarkozy’s governance (four as Minister of Interior Affairs, and five as President) corresponds to the explicit climax of this antagonism. This is why, the first chapter of Belmessous’s book written in the form of a fiction, appear so credible: in a given part of the Paris banlieue, a few young individuals engage in live fire with the police, killing three officers of the infamous BAC (Brigade Anti-Criminalité), and thus triggering a carefully prepared political process of emergency leading to the deployment of the army in various neighborhoods of the country.

After describing this troubling yet plausible scenario involving armed forces deployed against an entire part of the French population, Belmessous presents his research that consists for an important part of interviews with various figures of the army, the gendarmerie (the military part of the French police, polemically transferred under the authority of the Ministry of Interior Affairs by Sarkozy), and the police. In this regard, it is interesting to observe that the various military officers interviewed present many explicit and implicit signs of disagreement to their potential deployment on the national territory. On the contrary, the various members of the police interviewed appear in sync with the extreme antagonism proposed as politics by Sarkozy and the large part of the French right-wing that verbally and politically attempt to compete with its extreme counterpart, the Front National, which has been proposing the vision of a racist police state for decades. 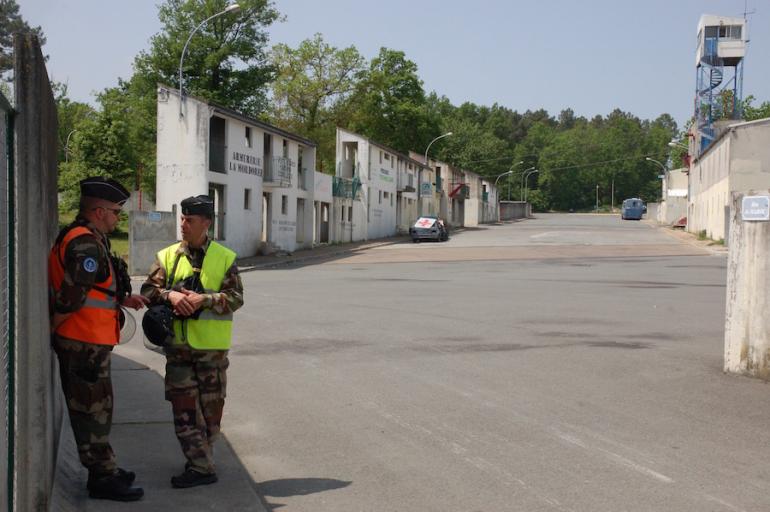 Training center of Saint-Astier / Photo by Louise Fessard for Mediapart

In order to be prepared to intervene in the Banlieue battleground, the gendarmerie uses the training center of Saint-Astier in the South-West of France (see the extensive article by Louise Fessard in Mediapart) as site of experimentation. Like many of its counterparts of Potemkine-villages — Chicago in the Negev for the Israeli army, the various MOUT training sites for the US army, those of the Dutch police, etc. — this training center involves different urban typologies in which the police-soldiers can practice exercise. As written in another article dedicated to this specific question, the way the police officers who act as insurgent during drills, is particularly symptomatic of the way actual insurgent’s claim are systematically discarded, and how racism operates in the anticipation of who these insurgents, as well as what their claim might be. In this regard, the satirical news TV Show Le Petit Journal, recently showed how, during a demonstration of this kind of drills in front of the current Minister of Interior Affairs, the police officers acting as insurgents were screaming “Viva Algeria,” thus presuming of the bodies that the gendarmerie would encounter in a real situation, and associating their claim to a fantasized allegiance to their country of origin.

Beyond the scenario of a military intervention in the Banlieues, Belmessous describes how, in the recent years, the police has been integrated in the urban decisions regarding the renovation of some Banlieue neighborhood. The research behind Opération Banlieues begins with a hearsay, which remains unproved as of today, but whose resonance to other verified interventions of security and control agenda in the renovation of the banlieues, gives it enough plausibility to be recounted: Belmessous describes how in the middle of the year 2000s, while urban renovation often rhymed with tabula rasa, and thus the demolition of entire housing buildings (“barres” ie. horizontal towers, and “tours” ie. vertical towers), the Ministry of Interior Affairs intervened to demolish one particular building against the choice that had been made for another one in the neighborhood. This choice would have been motivated to facilitate the access and intervention of the police. Similarly, in the forthcoming article written for The Funambulist Magazine, Belmessous describes how it makes no doubt that the streets that have been built in the green ‘plain’ of La Grande Borne (see below) have more to do with the possibility for the police to move its vehicles than for the firemen to access the buildings, as it has been claimed. 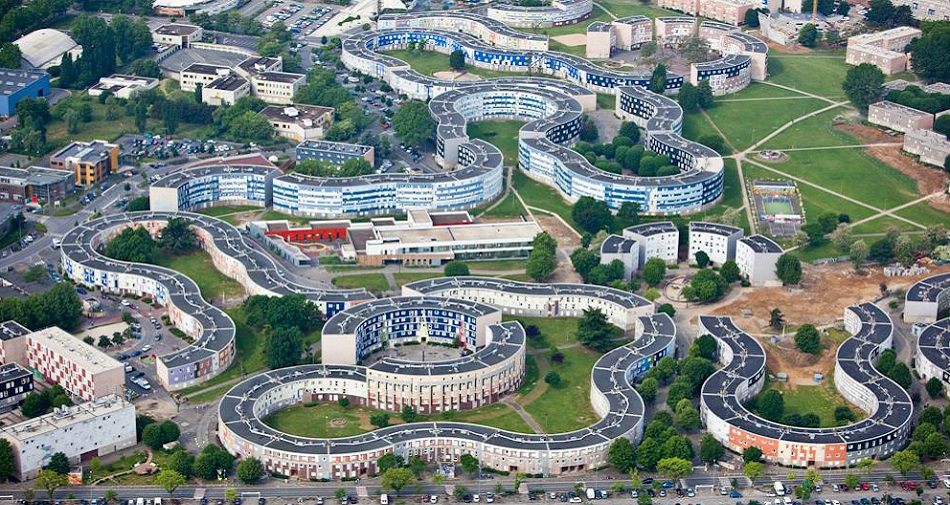 Examples of the presence of police officers at the design table for the renovation of the Banlieues in company of urban planners, architects and social-housing developers, are plethora. Such intervention resonates with 1970s architectural theories of “Design Against Crime” (see past article) as defined by architects like Oscar Newman and Barry Poyner. Their ambition consists in using architecture’s capacity to control visibility and filter bodies, in order to police collective housing spaces in addition of the establishment of local rules (a quota of children and youngsters to be allowed to live in these neighborhoods for instance).

The police has a strong sense of space. Like the army, it deploys itself in it, it controls it, it appropriates it. There is therefore no doubt that its participation in the design of entire neighborhoods like the Banlieues triggers effectively drastic changes in the organization of bodies in space. Yet, we should refrain from seeing such a participation as a corruption of the noble discipline we assume architecture to be. On the contrary, I would to argue, that when the police and the architect becomes one and only entity, it is the very essence of architecture that is accomplished: its violent inherent characteristics find their full-use and its ability to subsequently control the bodies it hosts is optimal. In the case of the Banlieues, it also sanctify the absolute separation of the police/architect and its inhabitants. The necessary antagonism that results from this separation is also what feeds it, since it creates and fuel the delinquency and criminality — something admittedly difficult to describe beyond the mythical narratives that characterize them on a daily basis — against which it claims to be organized. Only the dissolution of this rhetorical and political antagonism, which materializes, among other things, through the withdrawal of the police from any territorial organization can claim to “solve problems,” and actively destroy the segregationist agency of space in French cities.