Léopold Lambert – Paris on December 20, 2015
If you enjoy articles of the blog, have a look at The Funambulist Magazine!

So far, the totality of my photographs on this blog were licensed in creative commons, letting anyone use and share them, providing that they mentioned their author and do not financially profit from them. For the first time however, I feel the necessity to keep the copyrights of the ones presented here (above and below), in order to manually check the discourse that they would illustrate on other platforms. This technicality indicates the cautious tone of the following article, the latter being more about how we should speak about the new forms of informality that emerge in some European cities than about these neighborhoods themselves.

Sunday morning is the moment of the week when I undertake my research about the spatial politics of the Paris banlieues. This morning, I simply went at the limit of Paris municipality, not far from Saint Ouen, in order to visit the informal village that currently exists on the tracks of the Petite Ceinture between the gates — to enter Paris proper, one has to go through gates (see past article) — that constitute Porte de Clignancourt and Porte des Poissonniers. The Petite Ceinture is a 32-kilometer long railway that surrounds Paris, adding one more “belt” (that is the meaning of ceinture) to the two already existing ones surrounding “Fortress Paris”: the boulevards maréchaux and the boulevard périphérique (highway ring, see past article). The Petite Ceinture does not belong to the city of Paris but to the national railway company (SNCF) that used to transport goods around Paris between 1852 and 1934. It is now abandoned, and despite the interdiction to walk on it, many Parisians regularly enjoy its relative wilderness inside a highly controlled city. For people who regularly follow the work of architecture or urban planning students, seeing it as a chosen site for one of their projects is never a surprise. No later than two months ago, I gave a tour to Rhode Island architecture students who were going to design fictitious projects on it and, a few weeks later attended a thesis project investigating its Eastern parts.

In the recent municipal study to refurbish the Petite Ceinture in the near future (some short portions have been recently open to the public in the South and West), the Northern part where the informal village is setup is considered as a non-interesting “sequence.” The romantic wilderness that seduces architecture students and photographers — for good and bad reasons; this is not the topic here — is indeed not present here. On the following photographs, one can see a Eurostar train starting its trip to London, contrasting already in its comfortable migration with the surrounding makeshift habitat that echo those of migrants in Calais and Dunkerque, not far from the Channel Tunnel, where some of them are arrested every day trying to cross. The people who live in the precarious village of the Petite Ceinture are however not trying to go anywhere else than Paris. Most of them are Roma or Romani, although we should be cautious as this specific ethnic group became a discursive category that applies to all people from Eastern Europe living in a state of great precariousness. Politicians and demagogic journalists/intellectuals want us to believe that, coming from a nomadic culture, it is for their own good that the police regularly evict them from their dwellings and demolish them in a form of self-realizing prophecy — “see how they need to move regularly!”.  Hierarchizing racisms is not only a risky exercise, it is also useless, but the impunity with which administrative, police and discursive racism deploys itself upon this population is simply terrifying. Let’s recall that this racism is not new and, in its most extreme form, led to the Porajmos (the Romani Holocaust), which saw the industrial death of half-a-million people by the Nazis during WWII. In this regard, the more recent use of a RATP (Paris public transportation company) tramway in 2011 to evict another Roma camp recalled other forms of misappropriation of French transportation facilities to deport hundreds of thousands of Jews to the camps of the Holocaust.

If we now address the question of the precarious village as an architectural formation, here again we have to be cautious in our description. We should neither fetishized it in the way some academics and architects currently do with the various slums of the globe, nor should we deny it a sense of home, however precarious it might be. Fetishizing it would consist in completely disregarding the urgency and duress experienced by its inhabitants. Denying it a sense of home, on the other hand, would suggest the innocuousness of its eviction. In my opinion, the way we should look at it is as a symptom of a radically unequal (and racist, since the criteria of differentiation are based on ethnicity) mode of sovereignty or, rather, in the application of a fundamentally different mode of sovereignty. In this case, the biopolitical regime that controls, surveys and regulates the very lives of its subjects and about which our critique usually focus, does not even apply. This architecture is the result of a sovereignty that only manifests itself through the regular displacing violence deployed by the state institution in charge of such violence: the police. On the contrary of the situation often described on this blog of the banlieues, where the state has often illegitimately renounced to provide the services it provides in other parts of the city but is still present (however sordidly) in the very walls of social housing buildings, schools, bus stops, etc., the only relation that this informal village will have with the state will be the (violent) end of it.

Saying “it’s a shame to see shantytowns reemerging in Europe!” like we often hear, is not only insufficient, it can even legitimize the political discourses that order their demolitions in the name of public health (whose health?). But defending the collective appropriation of an abandoned terrain as a means of survival, although constituting an important short-term political objective, cannot go without the implacable critique of different modes of sovereignty simultaneously applied on a given territory. As the state of emergency is still operative in France (see past article), and, through it, an even greater discriminate police violence than in “normal” times, we can already foresee the violent eviction of the informal village by the police, despite the legal protection of the “winter break” that theoretically protect anyone to be evicted from a privately owned land during the winter months. As my research often examines how the spatial formations of neighborhoods facilitate or not potential militarized suppression within them, I can only fear of the conditions of this eviction: the Petite Ceinture constitutes a urban canyon with no entry/exit (in this case, two of them and their makeshift stairs have been produced by the inhabitants), and whose linearity would allow the police forces to intervene with the implacable zeal that they often enjoy manifesting. Through the following photos, I hope that giving the informal village a visibility — I have seen very little written about it — would sensitivities a political impetus to be formed, but I have to admit that producing such documents can prove risky and also serve opposite objectives. This text therefore finishes in the same way than it started, with the conscience of cautiousness that our discourses and actions should embrace when the precariousness of lives is involved.

All photographs by Léopold Lambert (2015, all rights reserved): 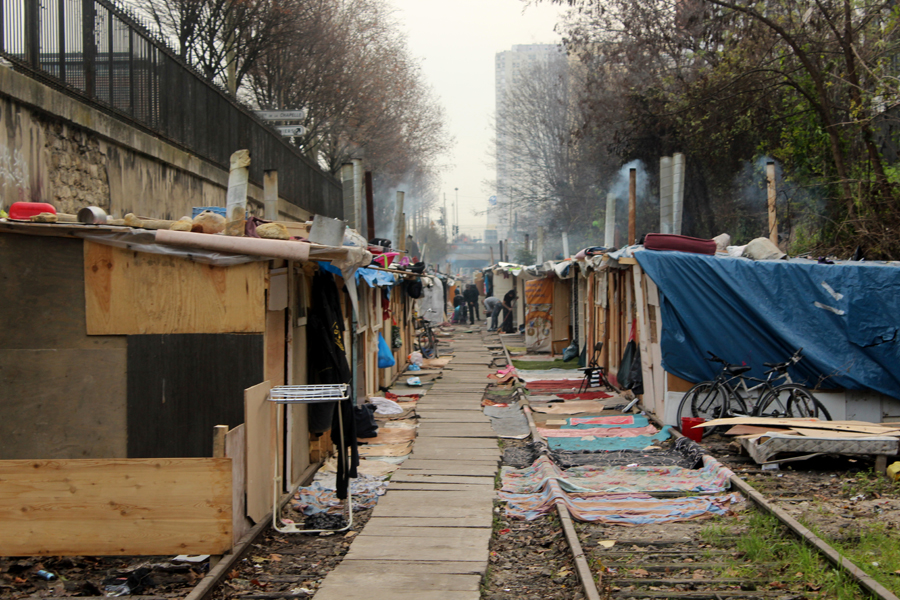 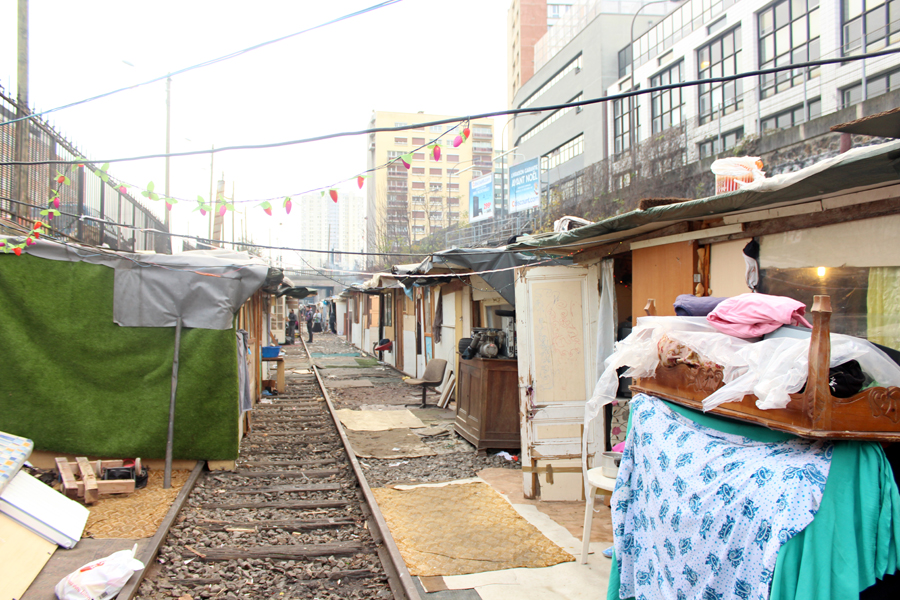 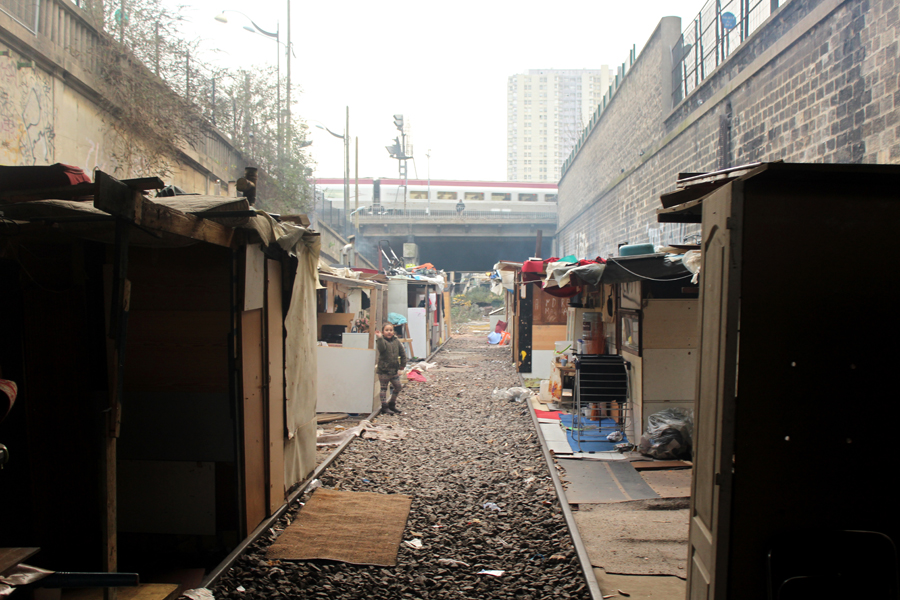 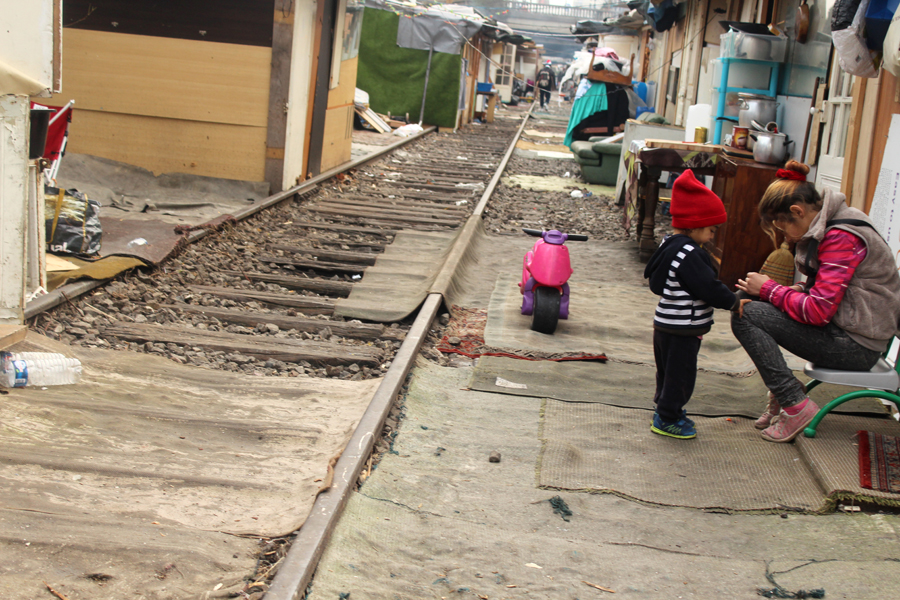 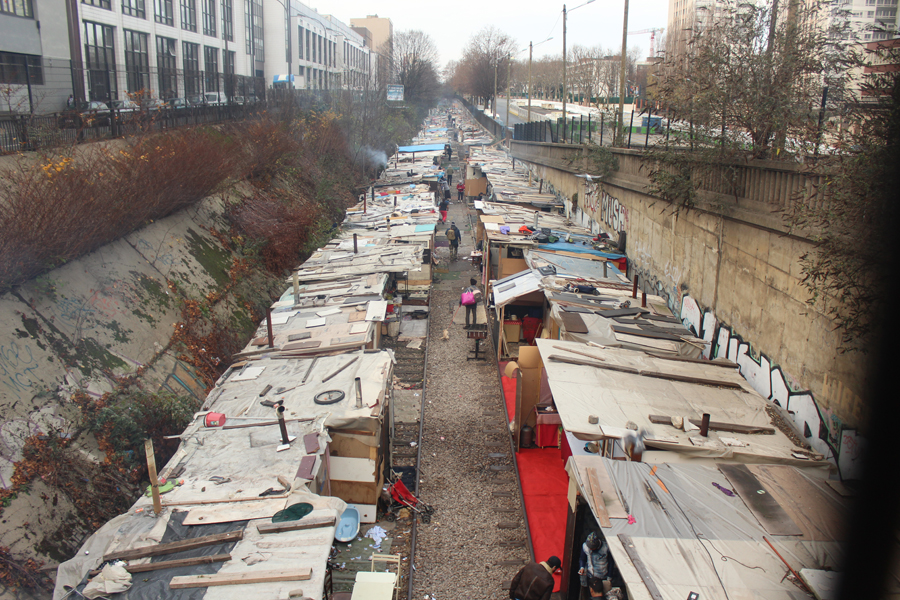 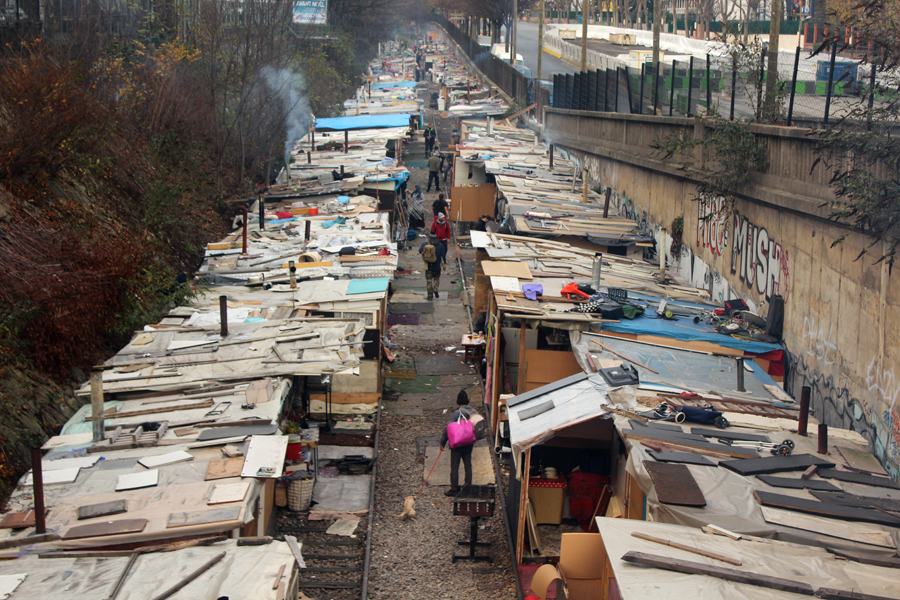 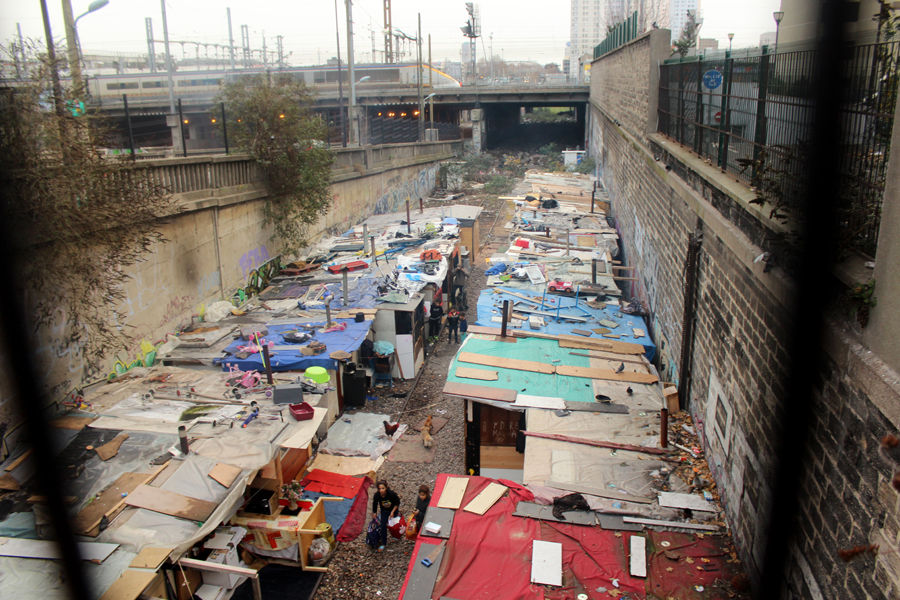