Léopold Lambert – Paris on February 4, 2016
If you enjoy articles of the blog, have a look at The Funambulist Magazine!

TWO IMPORTANT POINTS:
1. Although the photographs presented here are meant to contribute to a larger imaginary about the Calais’s “Jungle,” they represent only a fragment of it and, as such, can be misleading, the reason being that I did not want to take pictures of people. Is missing, among other things, the Jungle’s ‘main streets’ with its Afghani and Kurdish restaurants, its small shops and its religious buildings (three of which were demolished two days ago). The audacious inventiveness deployed to build these buildings and urbanity is therefore invisible on the photographs presented here.
2. In the same way than I did for a past article, I exceptionally decided to reserve all rights when it comes to these photographs (other pictures that I publish on this blog are licensed under creative commons), as I’m wary that their use could be instrumentalized for political ideologies with which I fundamentally disagree. If you would like to use them, feel free to send me an email to ask for authorization (info.funambulistATgmailDOTcom).

This article can be read in the continuity of the one entitled “Mud, Water & Steel: Migrant Bodies, Policed Environment and Humanitarian Architecture in Calais,” published on January 14, 2016. It constitutes an attempt to organize a few thought after a visit to Calais and Dunkirk yesterday. These thoughts do not address the individual and collective experiences of duress of the refugees who currently live in Calais’s so-called “Jungle” and Dunkirk’s Grande Synthe encampment but, rather, the massive deliberate means undertaken by the national and local authorities to write a new chapter of hardship for them. This rejoins an intuition that I have been able to express here in the past: when it comes to refugees, a radical politics that the European Union could adopt is…doing nothing. By this provocative statement, I mean that a significant part of hardship that refugee individuals and families currently experience is due to the various means deployed against them by the European Union (borders, walls, police harassment, and racism) and that the dismantlement of these means would drastically transform their daily lives and endeavors. This is not to say that their flee from various forms of individual and collective persecution should be met with indifference, but simply that the efforts that are currently put in antagonizing migrants and refugees are much greater than the ones necessary to provide adequate welcoming conditions to their temporary or permanent resettling. 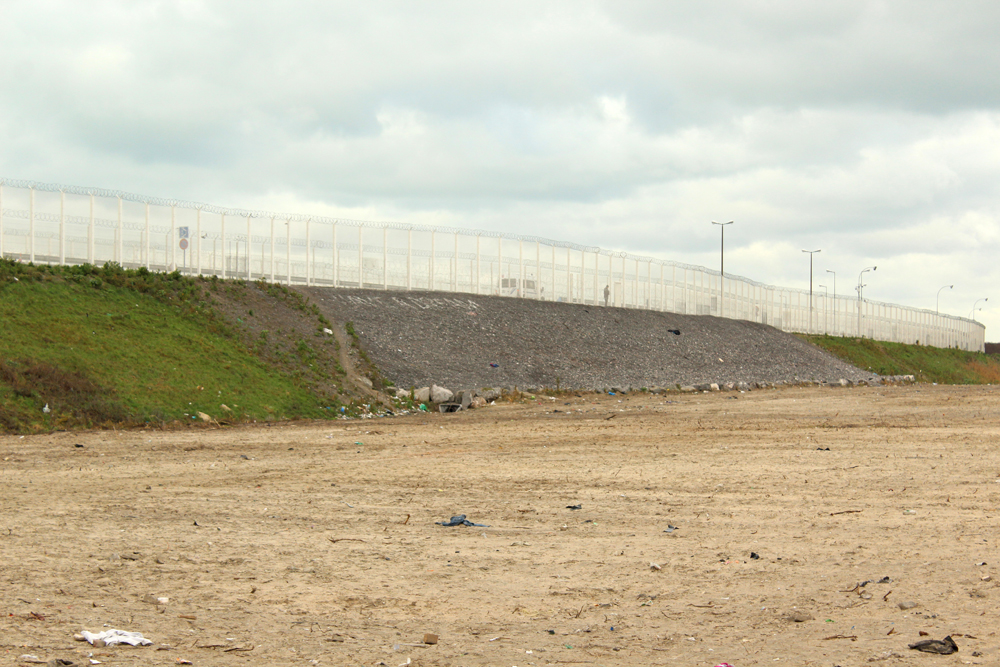 Hyper securitized fence set up along the highway adjacent to the Jungle and leading to the port. The figure and vehicles are part of one of the many police squads punctuating the fence’s course. The graffiti on the stones reads “Have a Dream.”

In the case of Calais, the following photographs illustrate several forms of embodiment of the antagonizing efforts. What strikes the most is the overwhelming police presence. Vans from the gendarmerie nationale (police force of the army), full of riot-geared officers are visible everywhere around the Jungle, in the port, and within the city center. An helicopter also patrols the sky, to potentially spot bodies trying to access the port (or further away, the channel tunnel). Such an access would prove particularly difficult since triple layers of barbed-wire fences and punctuated with surveillance cameras have been set-up along the four kilometers that separates the Jungle from the ferry terminal (a quick look at the Google Streets pictures taken in 2008 illustrate well the radical difference with the current situation). This fence, probably because of its shortness in comparison to the walls materializing the borders between the United States and Mexico or the one between Hungary and Serbia, is however nothing less than the highly securitization of the border between France and the United Kingdom, to the exact same degree than the two instances cited here. 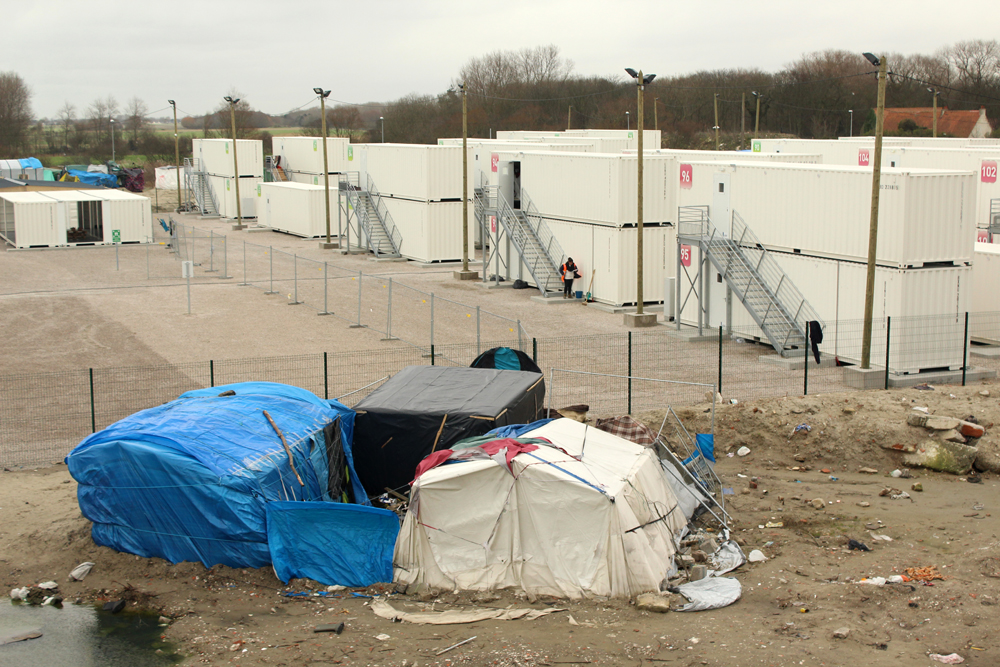 The recently assembled 125-container camp for a few hundreds of the 6,000 refugees that currently live in the Jungle, despite its humanitarian claims (or more likely, thought them) is also part of this antagonizing strategy, as we saw it in the “Mud, Water, and Steel” article. Beyond the extreme poverty of design of these containers and the inopportune symbol that they convey of bodies one would like to conveniently ship back to where they come from, beyond even the non-existence of any sense of urbanity (rigid alignment, no social space, etc.), there is the dimension of absolute control that rules its space. The camp is surrounded by a fence and its access is made by palm-recognition through this device — I was forbidden to take a photograph of it — under the supervision of employees, I had trouble identifying between humanitarian or security workers (of course, opposing them is ignoring the function of state-mandated NGOs). At the entrance of this camp, just like at the one of the service complex, a bit further, both operated by the NGO La Vie Active whose conditions of selection by the State remains unclear, the employees at the gates refuse to answer questions, let alone to grant access to regular citizens wanting to inspect the conditions of live provided by the premises.

Of course, security is a non-negligible dimension of such a place, in particular when a part of its selected population is made of women and children (raising other problematic aspects as exposed in the previous article). However, this dimension (as well as the others) needs to be addressed in the terms of its concerned actors, not imposed as a pre-thought condescending solution, informed by various forms of prejudices and the clear will to keep deplorable living conditions as deterrent to potential future settling. The only legitimate strategy that could have been applied here, in a situation that (we should not forget it) only exists through the application of illegitimate enforcement of borders, would have consisted in providing the totality of technical, material and infrastructural instruments to construct an immanent urbanity. In view of the drastic economic, material and human investment deployed for the antagonizing control and suppression of the 6,000 inhabitants of the Jungle, such a strategy would have not been difficult to implement.

PHOTOGRAPHS OF THE SITES DESCRIBED IN THIS ARTICLE /// (all photographs by Léopold Lambert for The Funambulist / all rights reserved, for reasons explained above (February 2015)) Special thanks to Joséphine Larere and Hicham Filali. 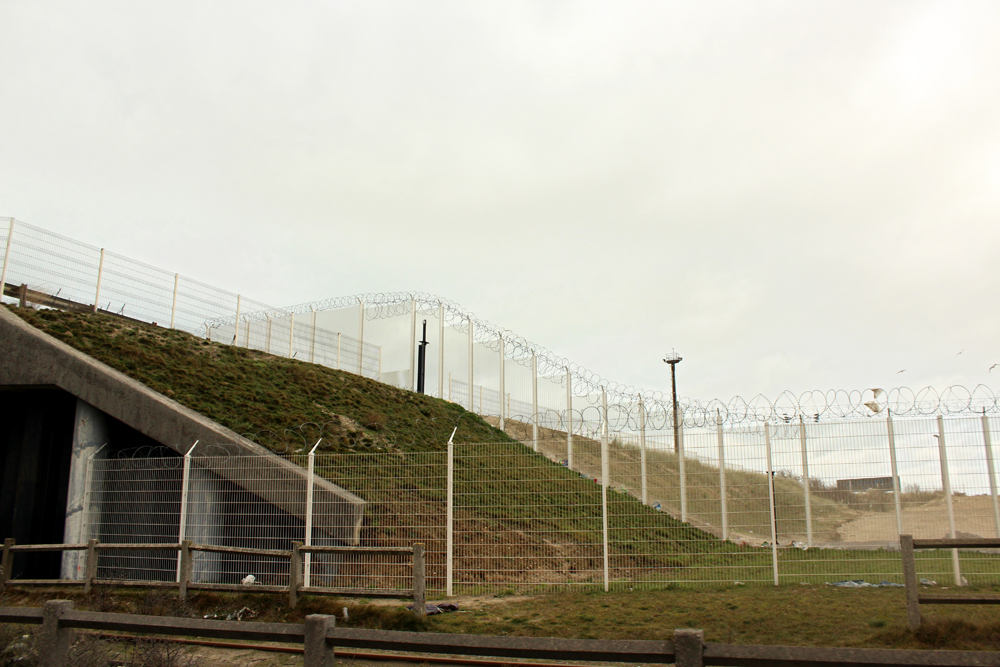 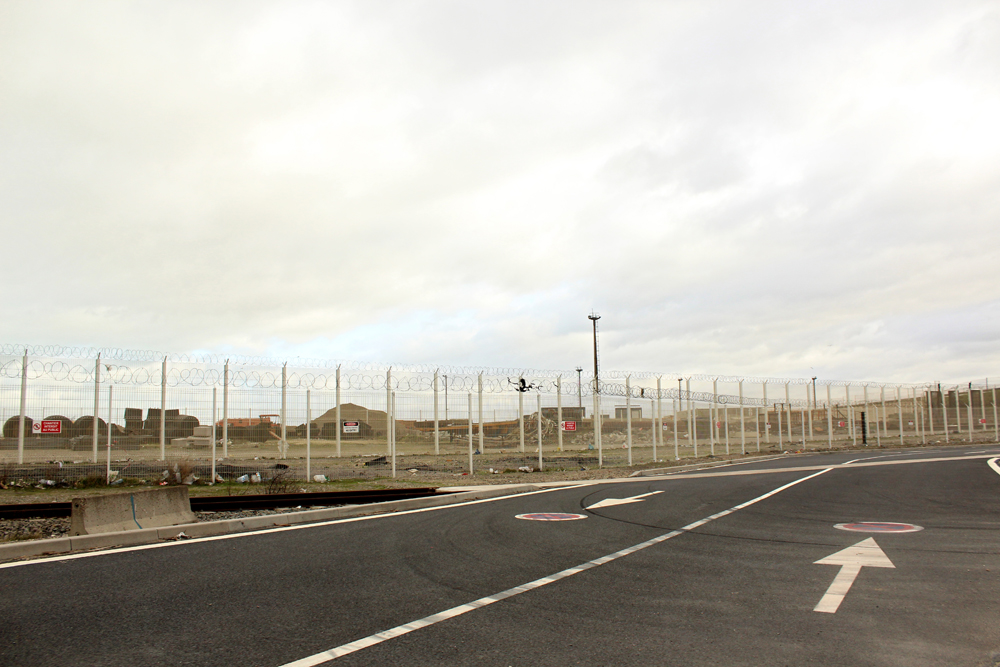 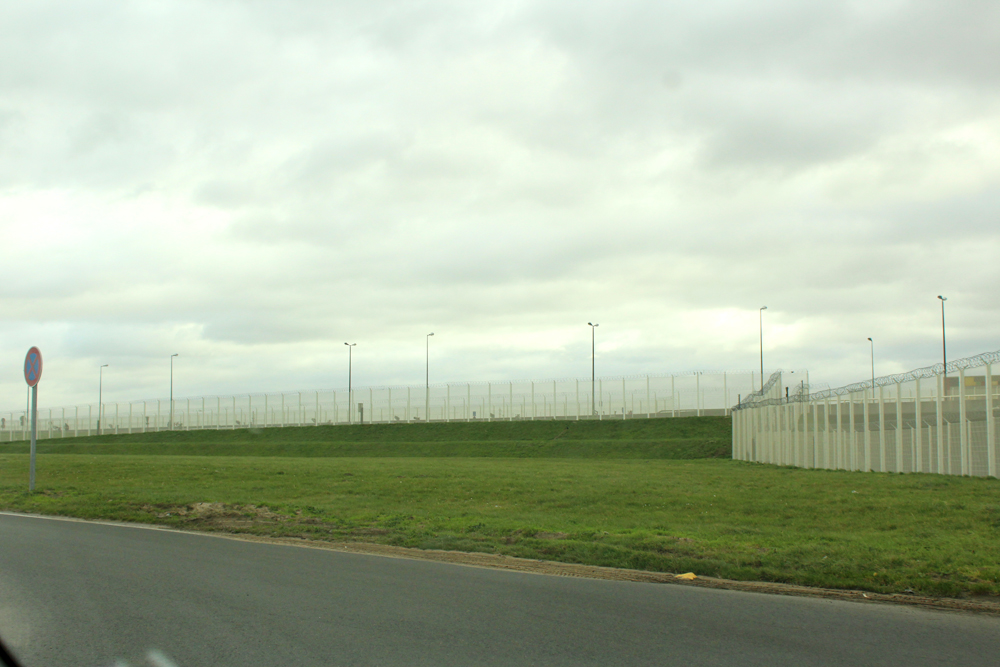 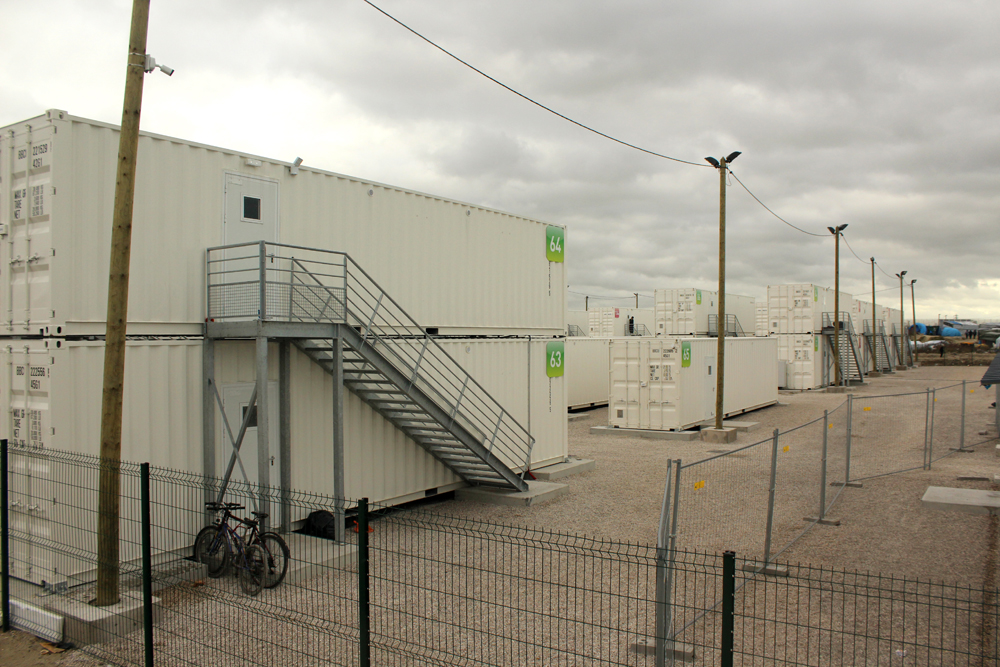 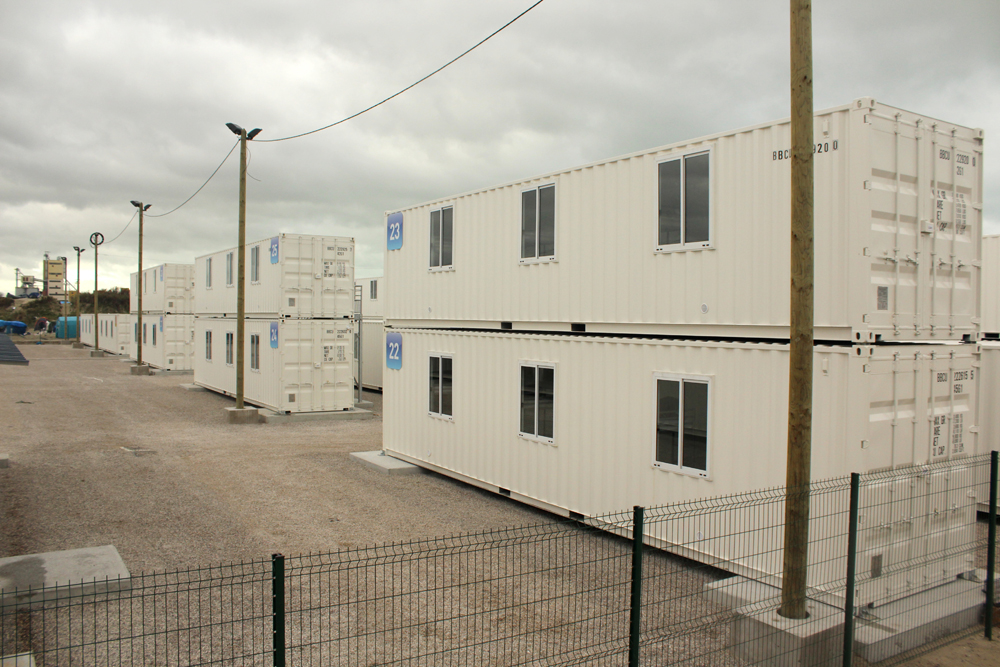 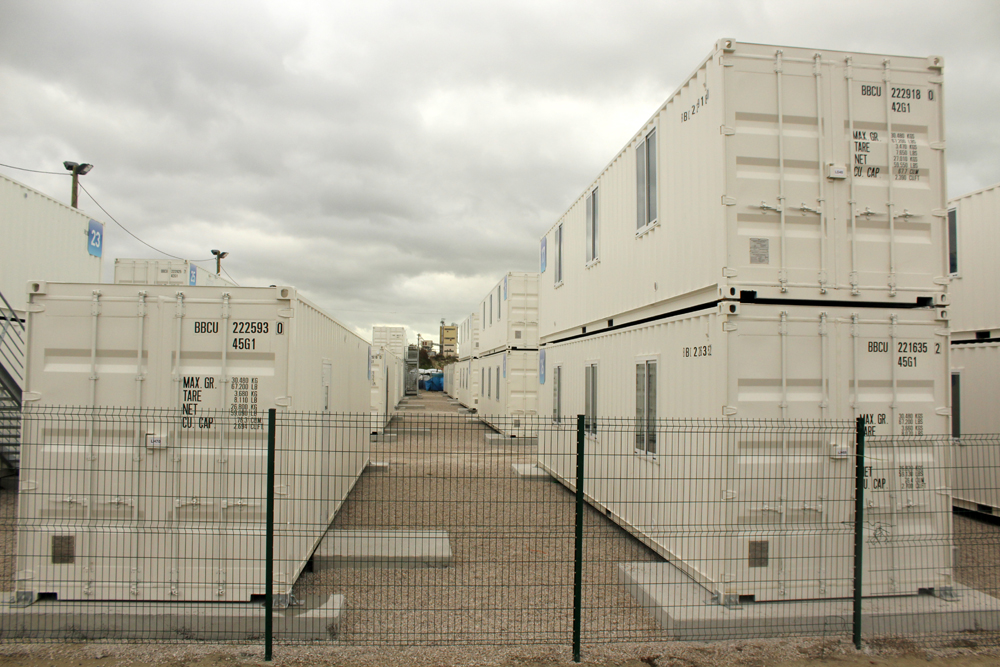 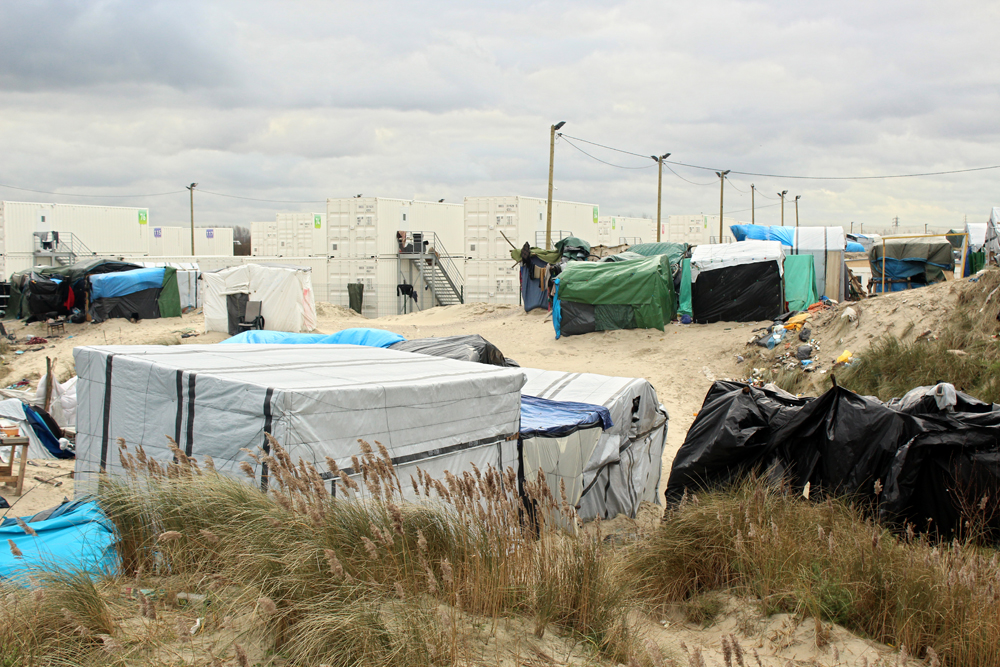 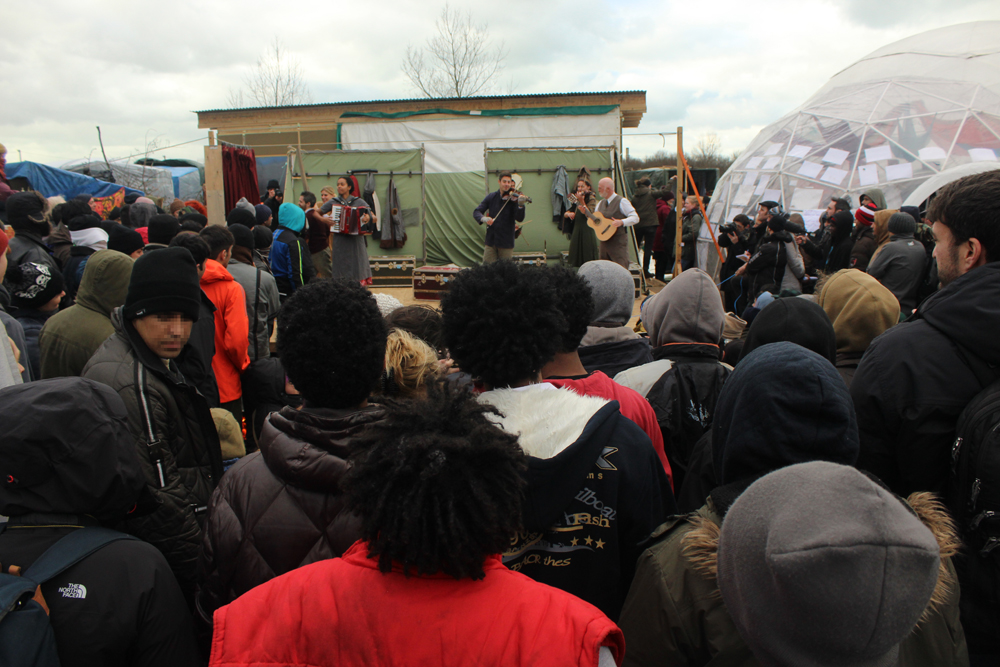 The Shakespeare Globe Company presenting their interpretation of Hamlet, in front of 300 people (see article in The Guardian). 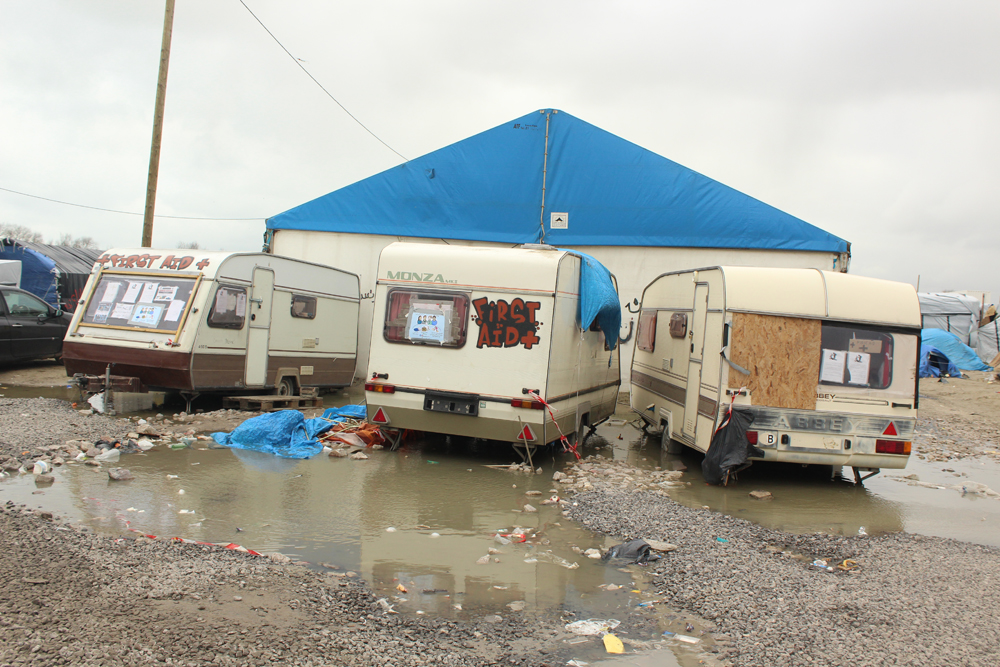 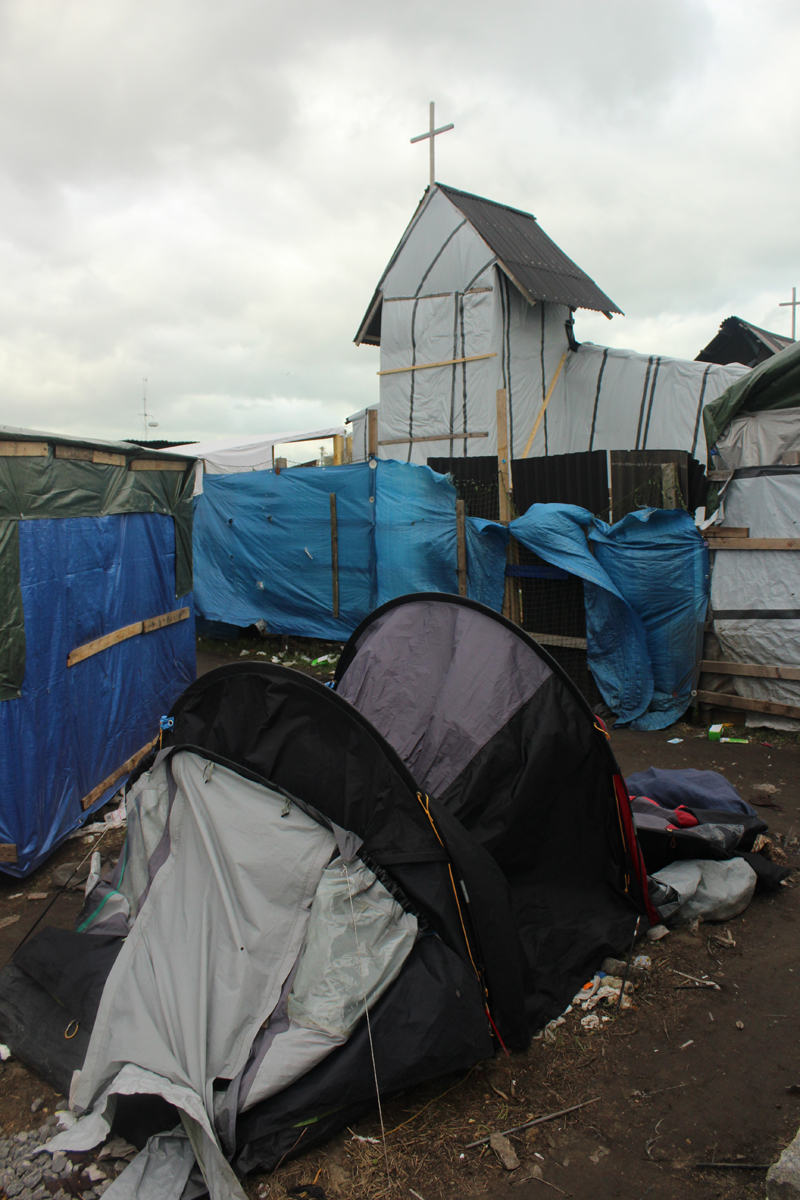 Coptic church of the Jungle, run by Ethiopian refugees 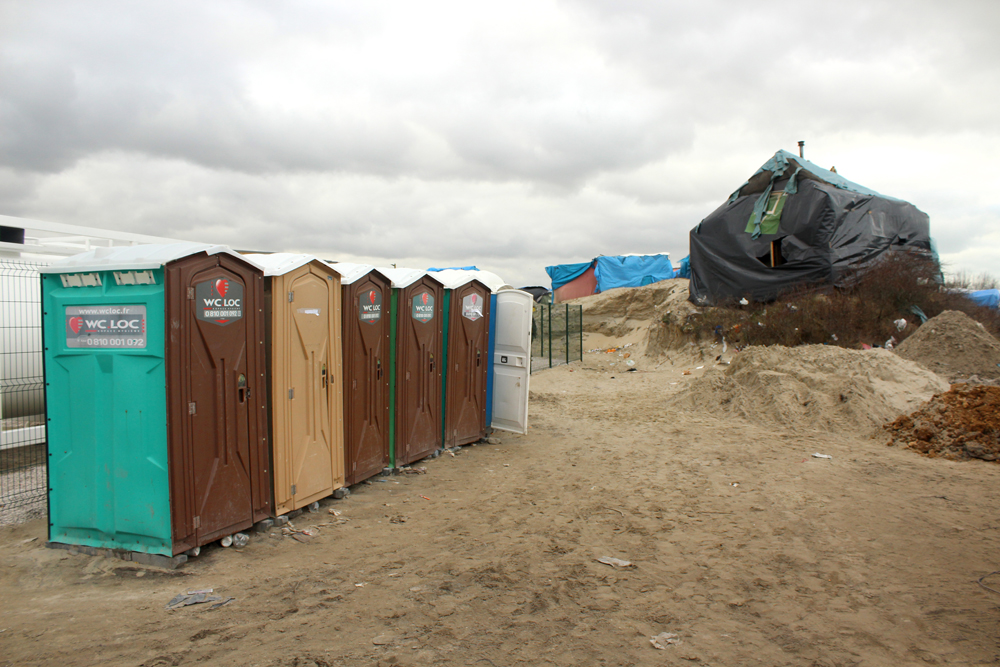 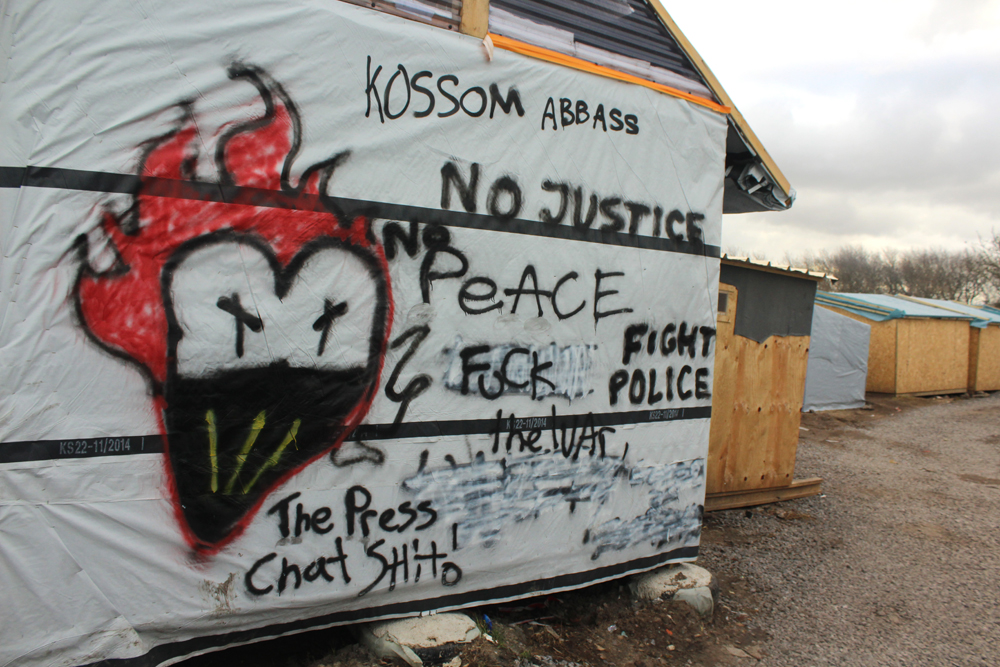 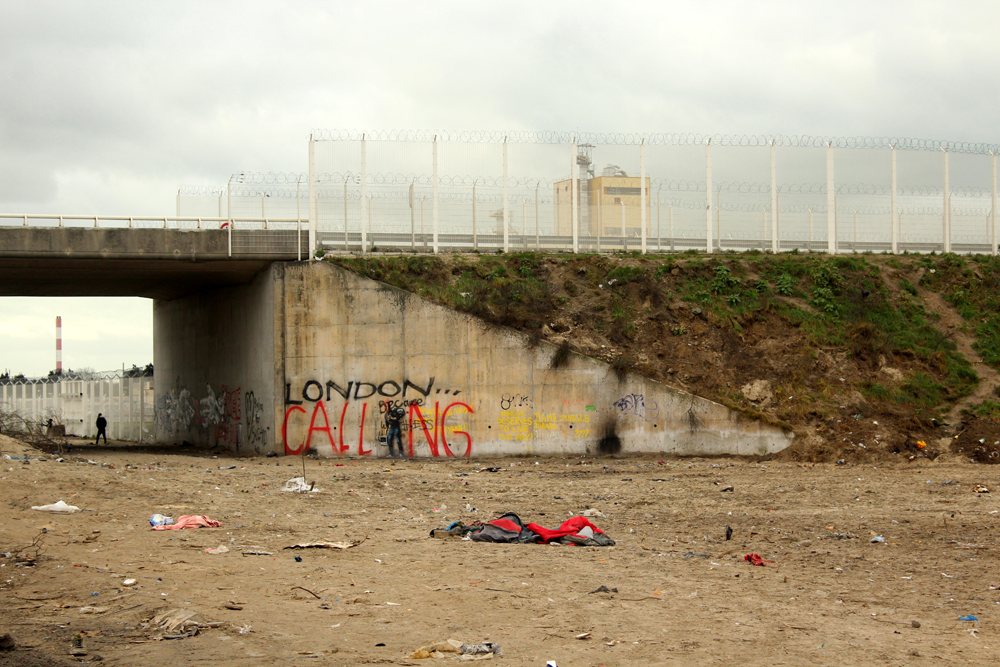 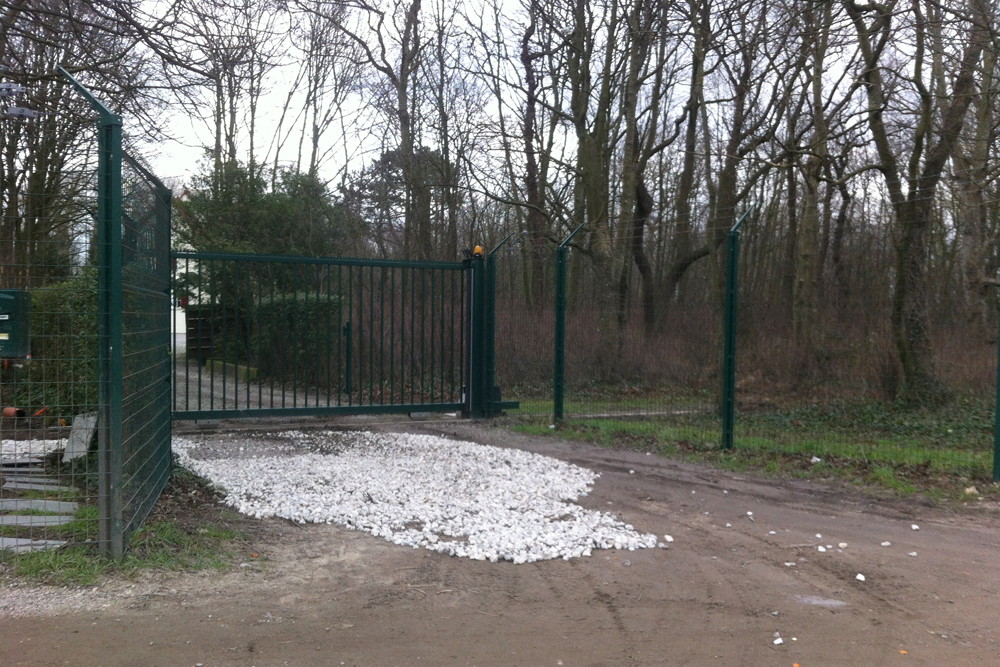 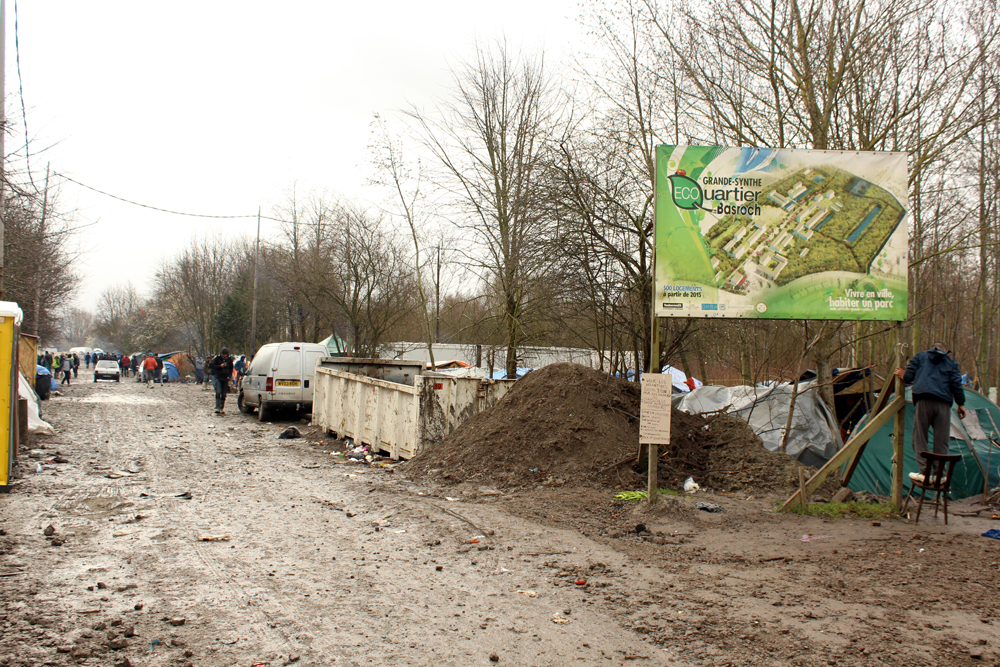 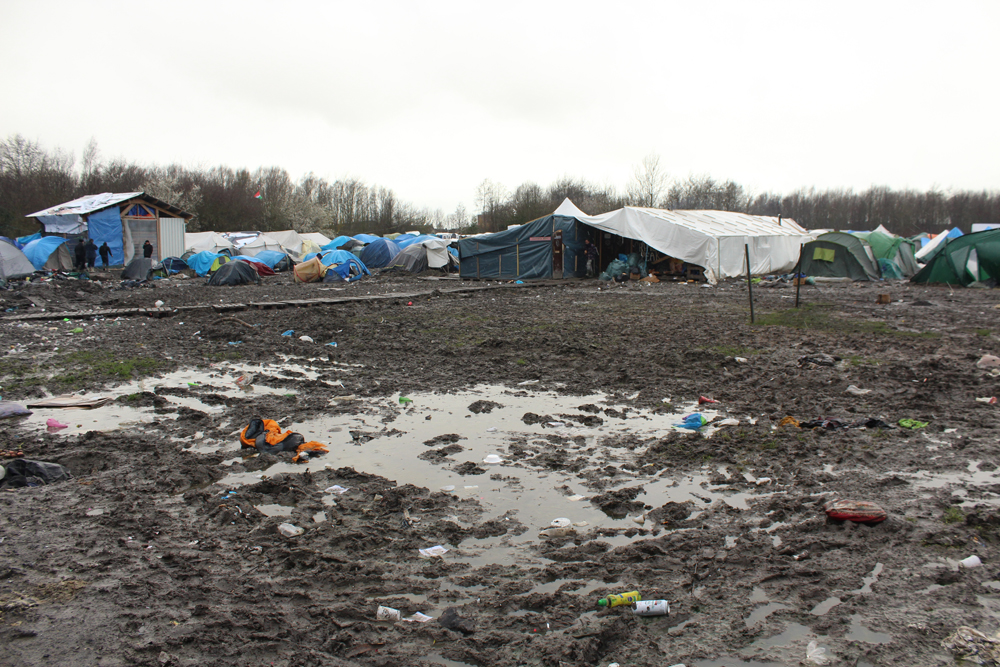 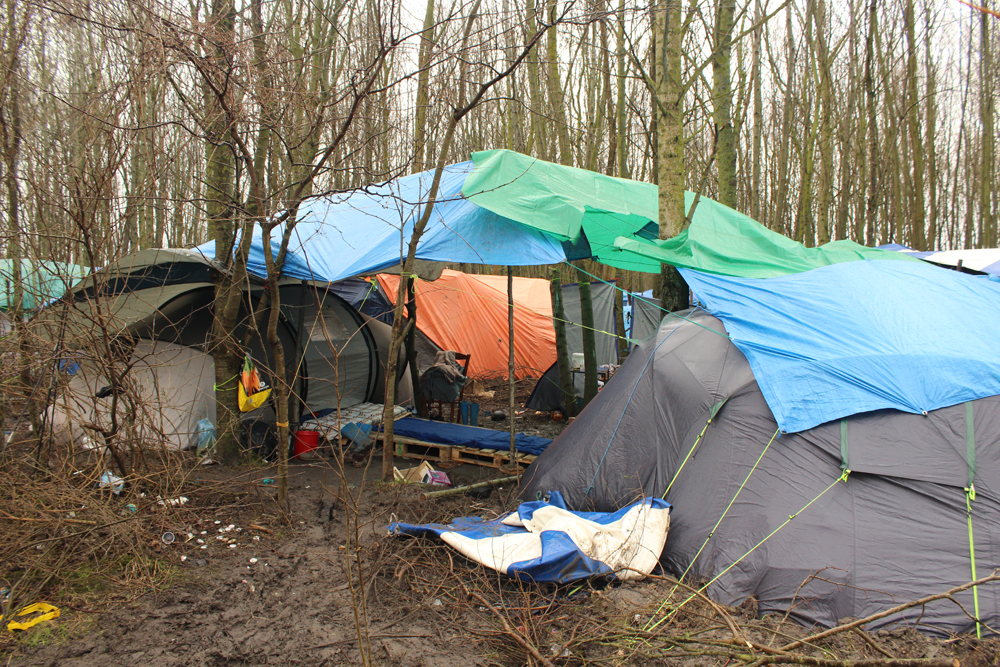